Rent-to-own stores offer furniture, TV’s, appliances, and other goods on the installment plan.  You agree to make weekly or monthly payments for a year or two, and the store delivers the item, often the same day.

Early in our work with tenants we were troubled by what we saw too often:  people whose lives had been destabilized by a rent-to-own deal, making payments to a rent-to-own store with money that should be going to basic needs.

So we began to study the industry – including, as we testified before Vermont’s Legislature, Rent-A-Center and Aaron’s.  What we found was in our opinion a predatory business.  We call it predatory because it targets low-income people, encourages heavy debt, and leaves people usually with nothing to show for the money they’ve paid.

If you manage to make all your weekly or monthly payments, the thing is yours, but you will have paid two to four times its worth, new.  But it likely wasn’t new.  It had been purchased by someone else, who missed a payment and lost their money when it was repossessed – as it will be again if you get behind.

So, with help from the Vermont Attorney General, we drafted a bill to regulate rent-to-own stores.  Industry lobbying stalled the bill in Committee twice.

We then shifted our attention to education, ultimately publishing a consumer’s guide, “Buying from a Rent-to-Own Store.”  We sent word of its availability to Vermont human service agencies and, in the first week, got requests for 8,000 copies.  Since then it has gone viral.  Within a year we’d distributed 20,000 copies, not only to human service agencies but to “consumer sciences” teachers across the state.  And copies were distributed nationally by the National Low Income Housing Coalition.

Having published the consumer’s guide, we returned to the Legislature, this time with help from Vermont Legal Aid.  And, in 2015, a bill finally was signed into law, for the first time regulating the practices of rent-to-own stores in the state.  It’s not a perfect law, but it provides some protections against serious abuse. 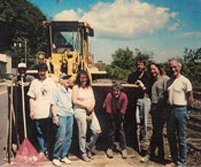